The report, which provides an in-depth assessment of equity finance markets for growing businesses, found total investment value soared in 2017 by 89% to £5.9bn, with the number of equity deals increasing by six per cent. This represents a 50% increase from the previous peak in 2015, signalling signs of investor confidence.

Deal sizes have increased across the whole market, with especially pronounced increases amongst the largest deals. 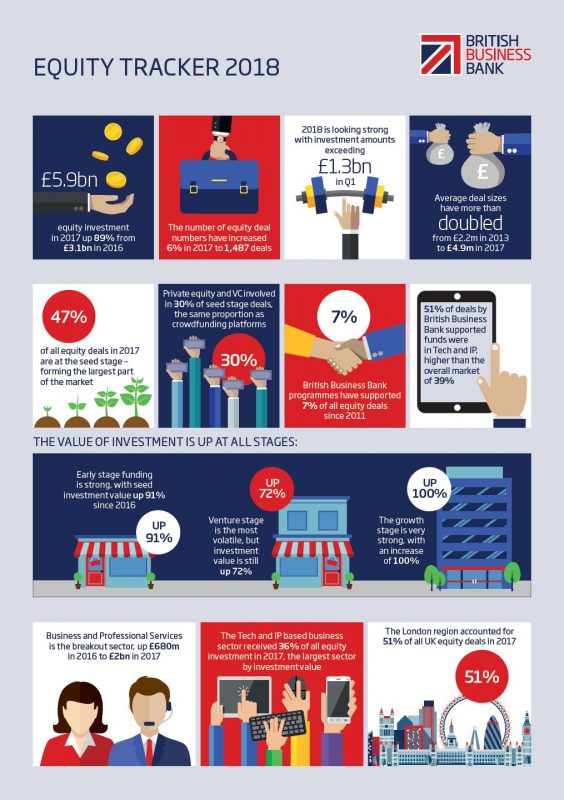 Keith Morgan, CEO, British Business Bank, said: “After a weaker 2016 the UK’s SME equity finance market saw a record year of growth in 2017 with investment amounts soaring to £5.9bn. This is a clear sign of investor confidence in British smaller businesses and their potential for growth.

“The British Business Bank continues to work to ensure businesses across the UK can access the equity finance they need to fulfil their growth potential.”

British Business Bank equity programmes are estimated to have supported around 7% of all equity deals between 2011 and 2017, accounting for around 10% of the overall invested equity amount. The Bank is the largest UK-based LP investing in UK Venture Capital.

About the British Business Bank

The British Business Bank is the UK’s national economic development bank. Established in November 2014, its mission is to make finance markets for smaller businesses work more effectively, enabling those businesses to prosper, grow and build UK economic activity. Our remit is to design, deliver and efficiently manage UK-wide smaller business access to finance programmes for the UK government.

As well as increasing both supply and diversity of finance for UK smaller businesses through its programmes, the Bank works to raise awareness of the finance options available to smaller businesses. It has published the Business Finance Guide (in partnership with the ICAEW, and a further 21 business and finance organisations). This guide impartially sets out the range finance options available to businesses – from start-ups to SMEs and growing mid-sized companies. Take the interactive journey at www.thebusinessfinanceguide.co.uk/bbb or download/print a copy.

As the holding company of the group operating under the trading name of British Business Bank, it is a development bank wholly owned by HM Government which is not authorised or regulated by the Prudential Regulation Authority (PRA) or the Financial Conduct Authority (FCA). The British Business Bank operates under its own brand name through a number of subsidiaries, one of which is authorised and regulated by the FCA.

20 October 2021 Smaller businesses responsible for around half of all UK greenhouse gas emissions from businesses, British Business Bank research reveals

7 October 2021 External finance now used by four in ten businesses across the UK, but a lack of local investors leads to wasted economic potential