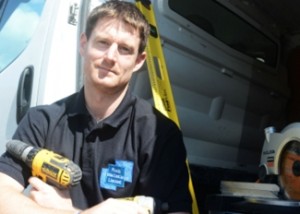 Simon Finch was granted a £9,000 Start Up Loan to launch his shop-fitting business, Finch Installations.

After 11 years in the construction industry, the company Simon was working for lost a number of major contracts so he made the decision to set up his own venture. He was approached by the company’s installations manager who was in charge of re-allocating these contracts, and he offered them to Simon to take on himself. Simon saw this as an opportunity too good to pass up so he began working on his business plan, drawing up financial forecasts, and registering the company.

Once everything was in place, Simon needed to secure some funding to enable him to start trading and approached The Start Up Loans Company. He applied for a loan through their Delivery Partner SWIG and felt supported from the outset, having been assigned a mentor who provided invaluable advice to help his business to get going.

The business has grown from strength to strength, but that’s not to say there haven’t been challenges along the way. 2015 was a quieter year compared to 2014, as high street retailers put store expansions and upgrades on hold following Tesco’s well-publicised financial troubles. Simon has also downsized the business slightly – rather than managing a large number of temps, he now has 10 full-time employees, but he still occasionally uses contractors.

Finch Installations is now the only fitter for SuperDry stores in the UK and for some European stores as well, and Simon even spent a week in New York fitting out a few SuperDry stores near Times Square – and hopes to secure more projects in the U.S. with different retailers. He is currently heavily involved in helping SuperDry to redesign their retail stores and is also one of the main fitters for Homestores, working with them on a complete re-design of their retail stores.

Another project Simon is working on in the coming months is a bar fit-out at Westfield White City in London. Looking back at stand-out projects along his business journey, from start up to growth, Simon says he particularly enjoyed fitting out a luxury kitchen showroom in Slough, with the cheapest kitchen layout on sale being £35,000!

Simon and his business, Finch Installations have already achieved a lot, winning some big contracts and also ranking as runner up for Best Potential Business Growth Award in 2016. Notably too, Simon is proud to have visited number 10 Downing Street twice since starting up his business.

Simon said: “The help I received from my Start-Up Loan Delivery Partner South West Investment Group, was fantastic and above and beyond the standard that I had expected. I was also assigned a mentor as part of my loan agreement. This proved to be invaluable in helping me to deal with any aspects of running a business that I was a little unsure of.”