The quarterly Markets Update provides an overview of key developments in SME finance markets. It draws on the latest evidence on the use of external finance by smaller businesses in the UK. This covers a wide range of products including bank lending, asset finance and equity deals.

Small business confidence about their prospects for the coming months remains low. The Q3 2019 FSB survey showed the confidence index was at -8.1. This was broadly unchanged from -8.8 in Q2. The index was negative for the fifth consecutive quarter, the first time this has occurred since the survey began in 2010. It was also well below the long-term average of +8.4. 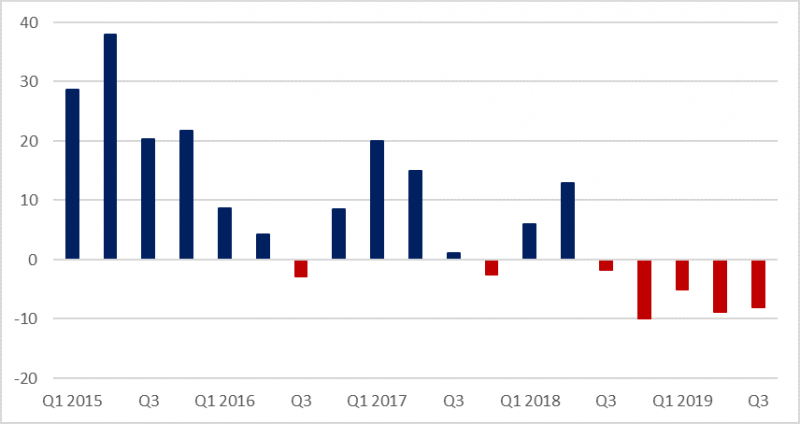 Similarly, the business optimism index in the CBI Industrial Trends survey for the three months to July (which is the latest available for the index and covers manufacturing firms of all sizes) was negative for the sixth consecutive quarter. The index fell to -32 from -23 in the three months to April.

This is matched in surveys of the wider economy. In September the UK All Sector Output PMI (the weighted average of those for manufacturing output, construction activity and services business activity) fell to 48.8 from 49.7 in the previous month, suggesting a slight decline in economic activity.

Concern around the current economic climate and political uncertainty 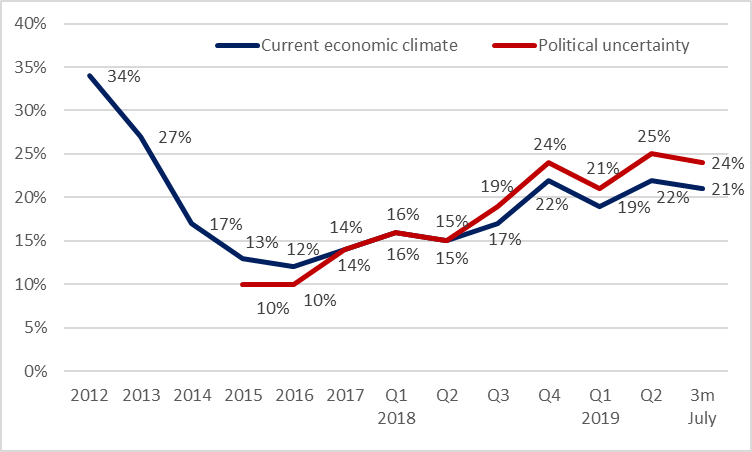 Source: SME Finance Monitor, 3 months to the end of July 2019

Real GDP fell 0.2% in Q2 2019 compared to the previous quarter, according to the Office of National Statistics. This was the first quarterly decline in more than six years. It followed an increase of 0.6% in Q1, which was partly due to stockpiling by businesses prior to the original March Brexit date.

Subsequent ONS data indicated real GDP rose 0.3% in July compared to the previous month. However, it is worth treating the monthly GDP data with caution because it can be subject to significant revisions.

Surveys indicate business investment plans remain weak. The Q3 2019 BoE Agents summary of business conditions reported that investment intentions weakened a little further and remained at a nine-year low as Brexit uncertainty continued to dampen companies’ appetite to invest. It also reported that a sizeable proportion of businesses had reduced, postponed and cancelled projects. Similarly, the Q3 2019 FSB Voice of Small Business survey showed the share of firms planning to increase capital investment during the quarter fell to 26%, a five-year low, from around 28% in Q2.

The OECD and Conference Board leading economic indicators both continue to suggest an uncertain and weak UK macroeconomic environment for the remainder of 2019.

Gross new bank lending to SMEs in the eight months to August 2019 was lower than in the same period last year, according to BoE data. Excluding overdrafts, gross new loans totalled £37 billion in 2019-to-date. This is down by 3.8% from the corresponding period of 2018.

The British Business Bank’s market contacts continue to report subdued demand for medium and long-term borrowing among SMEs. This is in line with the Q3 BoE Agents’ summary noting that the demand for credit remained subdued among small companies, reflecting uncertainty about the economic outlook and some de-risking. The soft demand for new loans is consistent with the recent weakness of business investment, ie the current environment has reduced the appetite among SMEs to invest for growth. The Q2 2019 SME Finance Monitor showed the willingness of firms to use finance to grow and develop their business fell in H1 2019 to 29% from 32% in the 2018 calendar year.

Our market contacts also still indicate that credit conditions have not changed significantly. However, banks continue to have lower appetite for the retail and hospitality sectors and are wary of the future financing for the agricultural sector. This is consistent with the Q3 BoE Agents’ summary noting that bank credit had generally remained accessible but tightened in some sectors including retail, casual dining and construction.

Like new bank lending, the total value of SME loan repayments in the eight months to August 2019 was lower than in the equivalent period of last year. Repayments in 2019-to-date totalled £35.8 billion, down 6.8%.

A possible explanation for the lower repayments is some SMEs want to have continued access to external finance. The Q2 2019 SME Finance Monitor showed that 20% of SMEs (excluding start-ups) reported a decline in turnover in H1 2019. This is up from 17% in 2018 and back to 2013 levels. The increased share of SMEs reporting a decline in turnover suggests the finances of some have tightened.

Another explanation for the lower repayments could be that some SMEs earlier paid down debt to strengthen their balance sheets ahead of the original Brexit date. Total loan repayments in the 2018 calendar year reached a record high.

The Q2 2019 SME Finance Monitor showed the use of overdrafts and credit cards rose in the first half of this year to 23% and 19% respectively, the highest since 2012. This is in line with the Q3 BoE Agents’ summary noting a pickup in the demand for short-term overdrafts and unsecured borrowing. Also, UK Finance data for the seven largest UK banks showed the use of overdraft facilities approved rose from Q3 2017 through 2018. The value of overdraft facilities approved fell back again in Q2 but remains higher than in 2016 and 2017.

The increased use of credit cards is consistent with the Q2 2019 BoE Credit Conditions survey, which saw lenders report an increase in the demand for credit card lending by small businesses for the second consecutive quarter. Subsequently, the Q3 BoE Agents’ summary noted a pickup in demand for working capital in the form of unsecured borrowing and overdrafts to support cash flow.

Use of overdrafts and credit cards 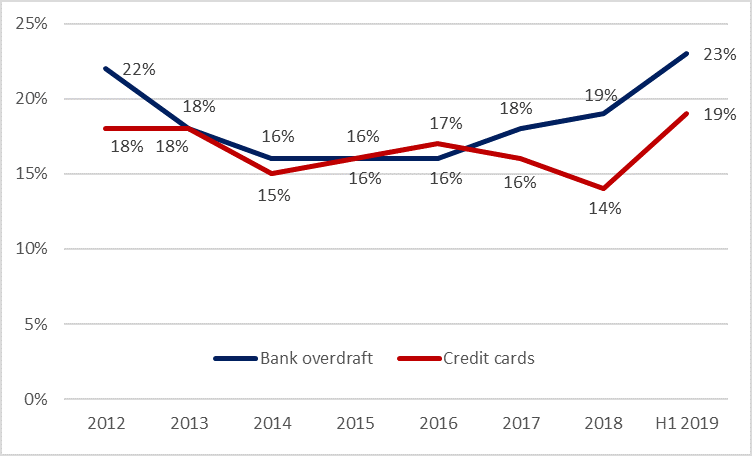 The value of UK marketplace lending to businesses – typically SMEs – in the first half of 2019 was £1.26 billion, according to our calculations based on Brismo data. This was down 2% from H2 2018, the first half-year fall since the data series began in 2010. Despite the decline, marketplace business lending was the second-highest on record and up 16% from H1 2018. 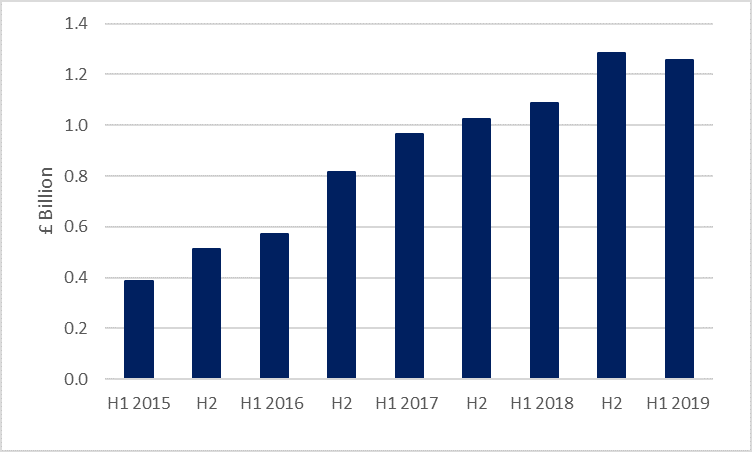 The weaker marketplace business lending in H1 2019 follows BBC Business reporting in July that Funding Circle Chief Executive Samir Desai said the uncertain economic environment has led to lower borrowing appetite among small businesses. He also indicated the SME lender would be tightening the lending criteria for its riskier customers. This is in line with the Q3 2019 BoE Agents’ summary reporting that peer-to-peer lending remained readily available, but some larger peer-to-peer lenders had tightened lending criteria.

In the seven months to July 2019 SME asset finance totalled around £11.5 billion, according to our estimate based on Finance and Leasing Association (FLA) data. This was 6.5% higher than in the same period of 2018. Though still strong, the pace of growth has eased somewhat since early 2019.

SME asset finance grew very strongly in Q1, up around 9% compared to the equivalent period a year earlier. During the quarter, January was 10% higher than in the same month of 2018. This was also the case for January and February combined. Our market contacts indicate the strength in Q1 was partly due to businesses securing warehouse storage space prior to the original Brexit date, as asset finance data can include warehousing. 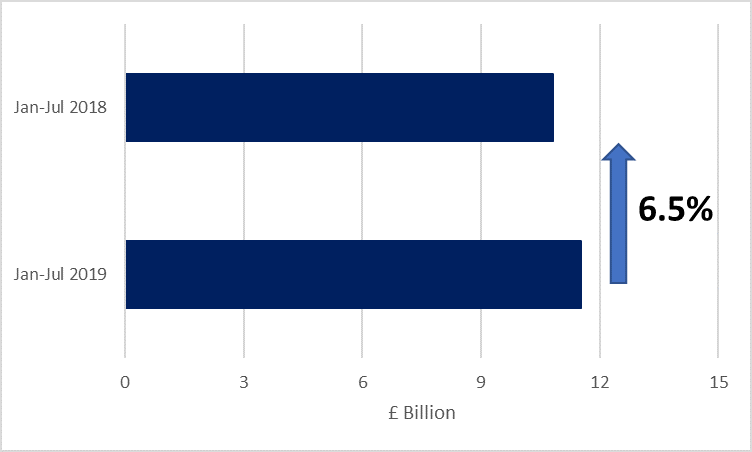 A high-level breakdown of the FLA data indicates the strong growth in 2019-to-date has been largely due to commercial vehicle finance, and plant and machinery finance. However, it should be noted this data covers the asset finance received by all businesses, not just SMEs. Commercial vehicle finance in the first seven months of this year totalled £5.4 billion, up 16% on the same period in 2018. Plant and machinery finance in 2019-to-date was £4.4 billion, 9% higher than in the corresponding period of last year. 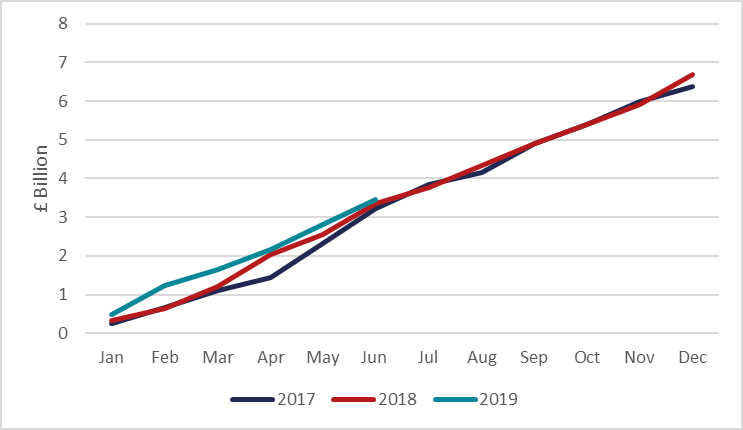 There were 866 announced UK SME equity deals in H1 2019. Deal numbers closely tracked the same period of 2018, increasing by 3%. They also rose by 13% compared to H2 2018, reversing the slowdown in deal activity observed in the latter half of last year.

Cumulative number of deals over year 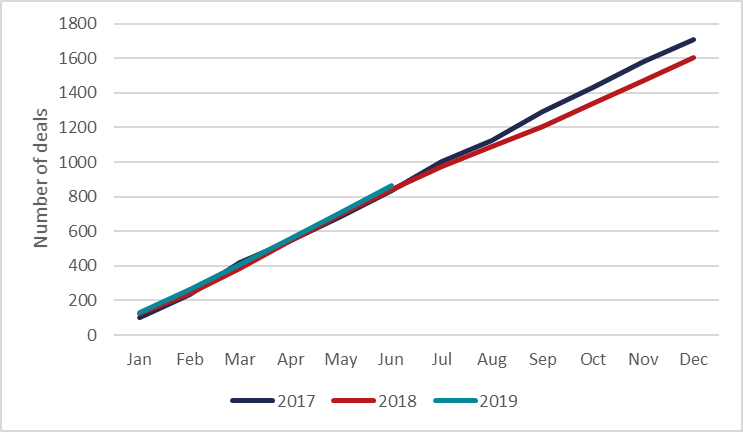 Data on the SME equity market in Q3 is not available yet. There were several large equity rounds in SMEs, including investments in Achilles Therapeutics (£100 million) and Sonovate (£110 million), suggesting the total value remained high. Similarly, there are currently no signs of a wider slowdown in deal activity outside of the traditionally-quiet August holiday period. Market intelligence indicates the current economic and political uncertainty may be leading some investors to delay making decisions. However, some companies are bringing forward raising equity now rather than waiting for market conditions to change.

Beauhurst data for all sizes of businesses in Q3 reported that both the value and number of equity deals fell compared to the previous quarter. However, this does not necessarily reflect the performance of the SME equity market because changes in the value of deals for large businesses can often drive the total.

Such fundraising activity indicates that the diversity and structure of SME finance markets has developed further, giving SMEs a wider range of options when seeking finance.

In a separate development, Atom Bank, iwoca, Modulr Finance and Currency Cloud won funds from the third £40 million tranche of funding from the £775 million Alternative Remedies package. This tranche aims to facilitate the expansion of business offerings to include lending, payments or international payments services to SMEs. Each of the four won £10 million. Atom Bank and iwoca have UK banking licences, while Modulr Finance and Currency Cloud Group are financial technology companies.

The following table brings together the latest data available as at 4 October from multiple sources, to present a snapshot of the current values of various types of external finance – and the number of reported deals for equity investment – provided to UK smaller businesses. Our 2018/19 Small Business Finance Markets report looks at market developments in more detail including regional comparisons and deeper dives into the demand side.

The information contained in this table should be viewed as indicative as data and definitions are not directly comparable across different sources. There can be some double counting across estimates in different parts of the table. Flows data are cumulative totals for the year or to the date stated. Non-seasonally adjusted.
(a) Net flows figures do not always reconcile with change in stock because of differences in statistical reporting.
(b) Data exclude overdrafts and covers loans in both sterling and foreign currency, expressed in sterling.
Latest data available as at 4 October.