The quarterly Markets Update provides an overview of key developments in SME finance markets. It draws on the latest evidence on the use of external finance by smaller businesses in the UK. This covers a wide range of products including bank lending, asset finance and equity deals.

There are signs approvals of short-term finance have eased

The number of venture capital funds closed increased in 2019, with fundraising reaching its highest level ever

Small business confidence about their prospects for the coming months continued to weaken in the lead-up to the UK general election. The Q4 2019 FSB Voice of Small Business survey showed the confidence index fell to -21.6, the lowest in eight-years. This was the sixth consecutive quarter in negative territory, the first time this has occurred since the survey began in 2010. The survey was conducted from late November to early December (the general election was held in mid-December). 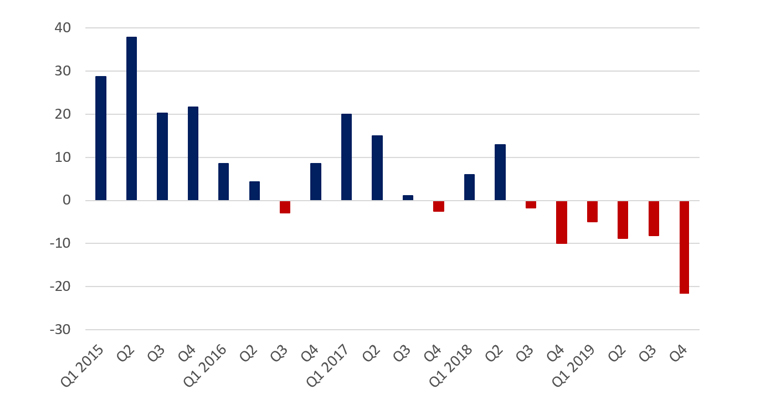 Similarly, the business optimism index in the CBI Industrial Trends survey for the three months to October 2019 (which is the latest available for the index and covers manufacturing firms of all sizes) deteriorated further. The index dropped to -44, the lowest in more than three years, from -32 in the previous period. This was the seventh consecutive negative quarter.

At the time of writing it is not possible to judge the impact of the election result on confidence because none of the main business surveys we look at are available yet. However, the December 2019 purchasing managers’ index (PMI) provides a partial insight because its two-week survey period included the election and the following week. The survey showed that confidence picked up somewhat in the services and construction sectors. Services’ confidence rose to the highest in 15 months, and the confidence of construction climbed to a nine-month high. A probable explanation for the pickup in confidence is the election result has led to a reduction in political uncertainty.

The low level of SME confidence in 2019 was consistent with increased concern about political uncertainty and the economy. The SME Finance Monitor for the three months to October 2019 reported that levels of concern around political uncertainty rose to the highest since the data series began in 2015. Also, concern around the current economic climate remained elevated after increasing during 2018.

Concern around the political uncertainty and the current economic climate 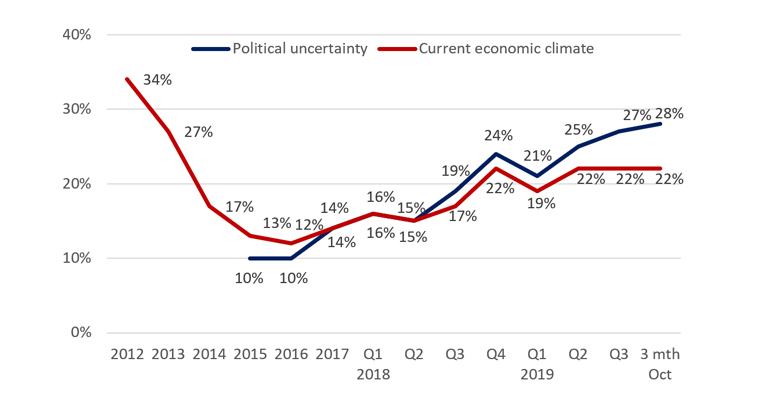 Source: SME Finance Monitor, 3 months to the end of October 2019

Real GDP rose 0.4% in Q3 2019 compared to the previous quarter, according to the Office of National Statistics. This followed the first quarterly decline in more than six years. Real GDP was volatile in the first half of last year, partly due to stockpiling by businesses prior to the original March Brexit date.

Subsequent ONS data indicated real GDP in November 2019 fell 0.3% compared to the previous month. However, it is worth treating the monthly GDP data with caution because it can be subject to significant revisions.

Business investment in Q3 2019 was flat compared to the previous quarter, according to the ONS. Increases in information and communication technology equipment, other machinery and equipment, and intellectual property products were offset by decreases in transport equipment and other buildings and structures. Business investment had risen in the previous two quarters after falling throughout 2018. 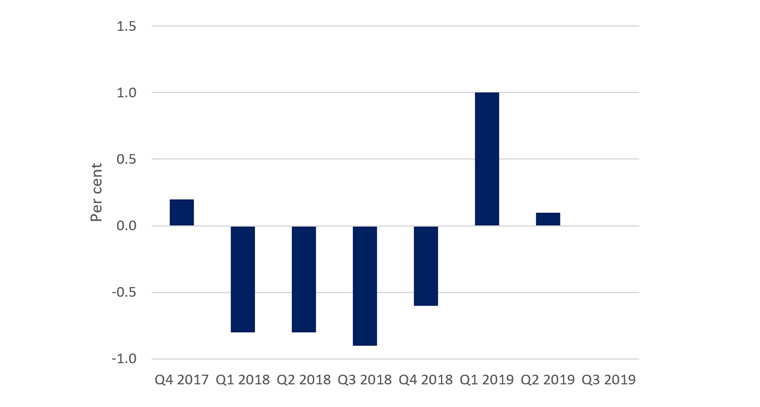 Surveys in the final quarter of 2019 indicated business investment plans remain weak. The Q4 2019 BoE Agents summary of business conditions reported that investment intentions remained depressed by slower global growth and political uncertainty. However, it also noted that companies continued to invest in maintenance and to replace existing equipment, and in information technology or automation to improve efficiency. Similarly, the Q4 FSB survey showed the share of firms planning to increase capital investment during the quarter remained low at 30%. This was up slightly from 26% in Q3 2019, a five-year low.

Forecasts suggest some recovery in the UK economy in 2020. The BoE’s central forecast for 2020 is for real GDP growth to pick-up to 1.6%. This is conditioned on a transition to a deep free trade agreement after Brexit and the Government fiscal measures announced in the September 2019 Spending Round. Similarly, the IMF expects the UK economy to grow 1.4% in 2020, conditional on a smooth Brexit transition and some recovery in labor productivity.

Gross new bank lending to SMEs in the eleven months to November 2019 was lower than in the same period last year, according to BoE data. Excluding overdrafts, gross new loans totalled £51.5 billion in 2019-to-date. This is down by 2.4% from the corresponding period of 2018. 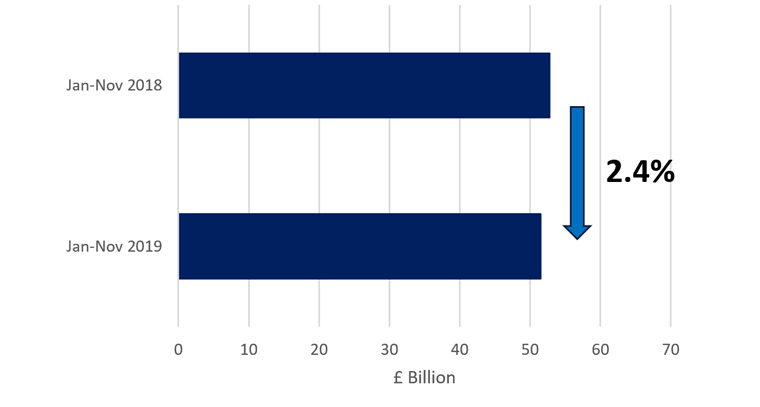 The British Business Bank’s market contacts continue to report weak demand for medium and long-term borrowing among SMEs. This is in line with the Q4 BoE Agents’ summary noting that the demand for credit remained subdued. The low demand for new loans is consistent with the recent weakness of business investment, ie the current environment has reduced the appetite among SMEs to invest for growth. The SME Finance Monitor for the three months to October showed the willingness of firms to use finance to grow their business in Q3 2019 was 29%. This was down from 31% in the previous quarter and 32% in the 2018 calendar year.

The Q4 2019 BoE Credit Conditions Survey showed that lenders reported the availability of credit provided to small businesses was unchanged compared to the previous quarter. However, they also reported a slight decrease in the availability of credit to medium-sized and large businesses. This is consistent with our market contacts recently reporting anecdotal evidence of some banks tightening credit conditions.

Like new bank lending, the total value of SME loan repayments in the 11 months to November 2019 was lower than in the equivalent period of last year. Repayments in 2019-to-date totalled £49.5 billion, down 5.5%. 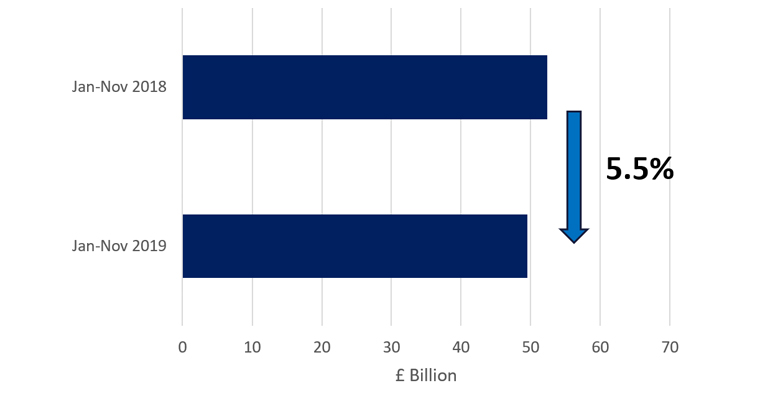 A possible explanation for the lower repayments is that some SMEs earlier paid down debt to strengthen their balance sheets ahead of the original March 2019 Brexit date. Total loan repayments in the 2018 calendar year reached a record high.

Another explanation could be that some SMEs have become more concerned about future cash flow and want to preserve their cash balances. The SME Finance Monitor for the three months to October 2019 showed that, in Q3, 25% of smaller businesses held large credit balances, ie of more than £10,000. This is up from 21% in Q2 and 23% in 2018.  It’s also possible that some SMEs have reduced their loan repayments because they want to have continued access to external finance.

There are signs approvals of short-term finance have eased

The SME Finance Monitor for Q2 2019 (the latest available) showed that the use of overdrafts and credit cards rose in the first half of last year to 23% and 19% respectively, the highest since 2012. However, there are signs the demand for, and approvals of, short-term finance have subsequently eased.

First, the Q4 2019 BoE Credit Conditions Survey showed that lenders reported the demand for total unsecured lending from small businesses had fallen slightly over the past three months. This was the first quarterly decline in two years. The breakdown indicated the demand for credit card lending was unchanged while that for other unsecured lending (which includes overdrafts) declined. 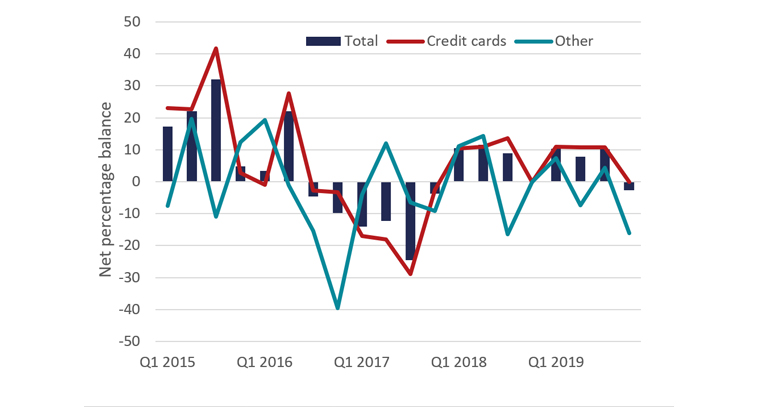 Value of overdraft facilities approved or increased each month 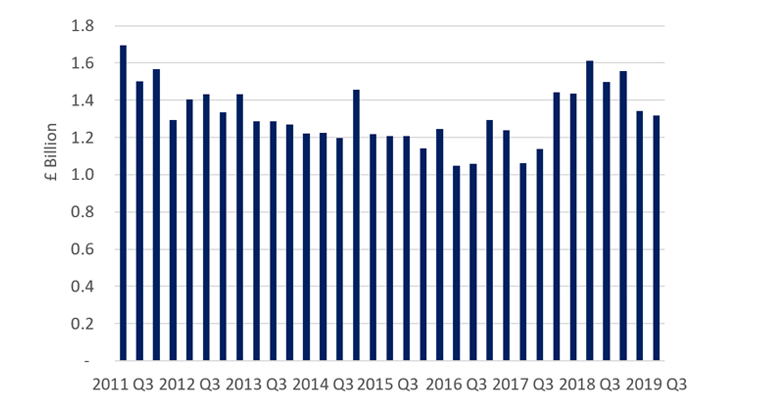 Beauhurst data shows equity investment values were very strong over the first three quarters of 2019 and likely reached record levels in 2019. There was £5.5 billion of equity investment in UK SMEs in 2019-to-date, a 13% increase relative to the same period in 2018. This was primarily driven by increases at the growth stage, in terms of both the number and average size of deals. Around £3.3 billion went to growth-stage SMEs between the first and third quarters of 2019, up 33% on the same period of 2018. Similarly, the value of seed stage investment value increased by 14%. However, venture stage investment declined by 16%. 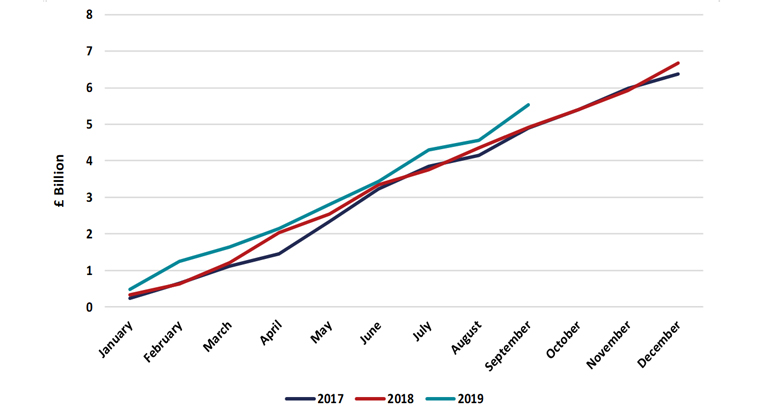 There were 1,241 announced UK SME equity deals over the first three quarters of 2019, a 3% increase relative to the same period of the previous year. Growth stage deal numbers increased by 18% to 238 in 2019-to-date compared to the corresponding period in 2018. Seed-stage deal numbers recovered slightly after a weaker 2018, increasing by 4% to 527. However, this is still much lower than their peak in 2017.
Venture stage deal numbers dropped slightly, by 3% to 141. 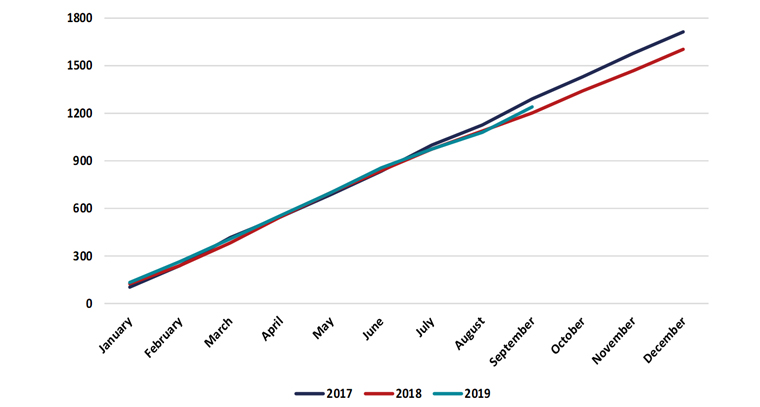 The number of Venture Capital Funds closed has increased, with fundraising reaching its highest level ever

UK based venture capital (VC) funds continued to close in 2019. A total of 20 reached final close, according to our analysis of Pitchbook data. This compares to 18 in the previous year and was the second consecutive annual rise. The amount of UK VC fund raising in 2019 was £3.8 billion. This was up from £2.3 billion in 2018 and the highest on record.

Asset finance grew in the first ten months of 2019, despite the weakness of business investment. Total asset finance new business (largely leasing and hire purchase) was £16.2 billion in 2019-to-date. This was up 5.6% on the same period of 2018. However, this pace of growth was slightly lower than in the first five months of 2019 (8.4%).

In the first three quarters of 2019, growth was largely driven by plant and machinery finance and commercial vehicle finance. However, the data for October (the latest available) showed IT equipment finance grew strongly, up by 43% on the same month in 2018.  This partly reflects the weakness of IT equipment finance in October 2018. The Finance & Leasing Association (FLA) expects further growth in new business in 2020. 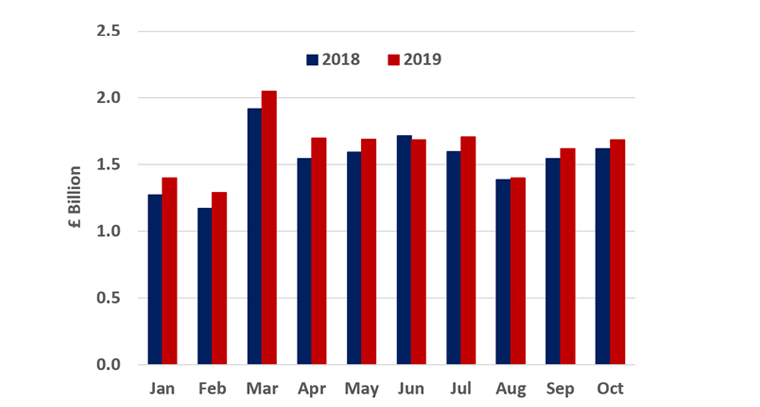 The following table brings together the latest data available as at 3 January from multiple sources, to present a snapshot of the current values of various types of external finance – and the number of reported deals for equity investment – provided to UK smaller businesses.

Our 2019/20 Small Business Finance Markets report, which looks at market developments in more detail including regional comparisons and deeper dives into the demand side, will be published on February 27th.

The information contained in this table should be viewed as indicative as data and definitions are not directly comparable across different sources. There can be some double counting across estimates in different parts of the table. Flows data are cumulative totals for the year or to the date stated. Non-seasonally adjusted.
(a) Net flows figures do not always reconcile with change in stock because of differences in statistical reporting.
(b) Data exclude overdrafts and covers loans in both sterling and foreign currency, expressed in sterling.
Latest data available as at 3 January.