This interim evaluation provides supporting evidence on the effectiveness of the ECF programme in meeting its objectives. The programmes’ primary objective is to address the ‘equity gap’ by increasing the availability of early stage equity finance to high potential UK companies.

Established in 2006, the ECF programme has supported 28 fund managers to raise 36 funds, with total investment capacity of £1.72bn and £984.4m of commitments supporting 665 companies across 701 equity deals [1]. This interim evaluation focuses on 11 ECFs supported by the British Business Bank between 2014 and 2017 following renewal of State aid approval for the programme in 2013, alongside three additional VC funds supported by the programme between 2011 and 2013. 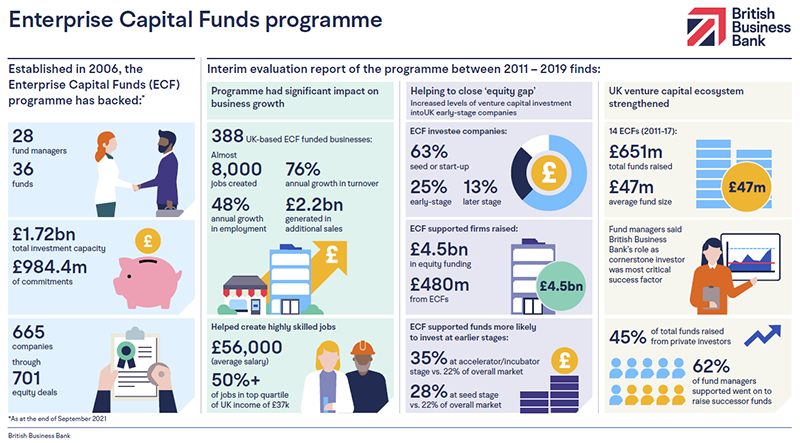 The evaluation report estimated that the 388 UK-based firms funded by the ECF programme between 2011 and 2019 created almost 8,000 jobs and generated £2.2bn in additional sales by March 2019. Those companies funded by ECFs saw their annual rates of turnover and employment grow by 76% and 48% respectively.

The evaluation found that 63% of ECF recipient businesses were either at the seed or start-up stage, 25% were early-stage and only 13% were later stage companies, showing ECF is supporting early stage UK companies as intended.This is a greater proportion than the overall UK equity market where 44% of deals were in early stage companies.

By the end of 2019, those companies being supported by the ECF programme raised an estimated £4.5bn in equity funding (including follow-on investments), with £480m of this total coming from ECFs, showing the programme is helping to unlock increased equity funding for these companies.

The evaluation found that the UK’s VC ecosystem has been strengthened by supporting emerging fund managers to raise funds and become more established investors.

Examining 14 ECF funds that started investing between 2011 and 2017, the report found they had raised a total of £651m with an average fund size of £47m. Fund managers interviewed for the evaluation reported that the British Business Bank’s role as an investor was the most critical factor in the success of their fund raise. Forty five percent of the total investments came from private sector investors, with each fund comprised of at least a third of private capital in line with the programmes’ objectives. 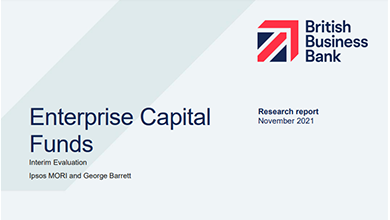