The quarterly Markets Update provides an overview of key developments in SME finance markets. It draws on the latest evidence on estimates of stocks and flows of external finance used by smaller businesses in the UK. This includes bank lending, asset finance and equity deals.

The Brexit extension until October 31 has prolonged uncertainty, weighing on the business confidence of SMEs

This quarterly Markets Update focuses on the ongoing significant economic and political uncertainty. It covers the potential impact of the uncertainty on the economy, business confidence and SME finance markets in the UK.

Real GDP rose 0.5% in Q1 2019 compared to the previous quarter, according to the Office of National Statistics. This followed a 0.2% increase in Q4 2018. However, the breakdown of the data indicated that the stronger growth is partly due to temporary factors associated with some businesses preparing for the original Brexit date of March 29.

Change in UK real GDP from the previous quarter 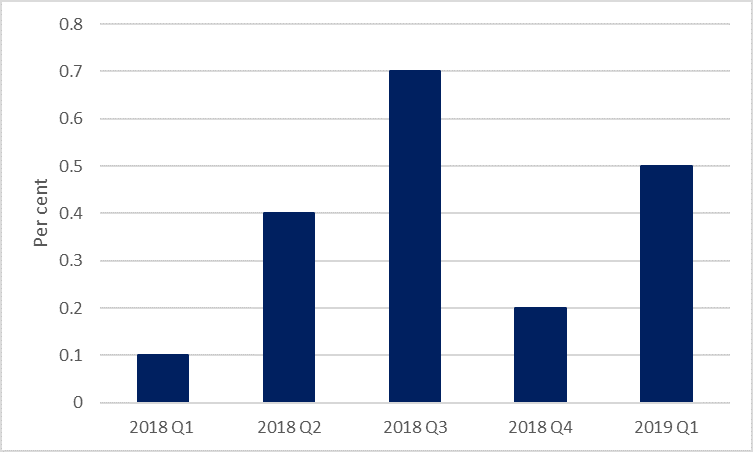 In Q1 2019 the manufacturing sector was one of the main drivers of the stronger growth. Manufacturing output grew 1.9% compared to the previous quarter, the fastest pace since 1999. However, surveys indicate that concerns about potential Brexit-related disruption to supply chains led some businesses to build up stocks, providing a large but most probably temporary boost. The March IHS Markit purchasing managers’ index for manufacturing showed the largest increase in inventories since it began in 1992. In terms of the whole economy, the June 2019 Bank of England Agents’ survey on preparations for EU withdrawal reported around 40% of respondents had been stock-building in the run-up to the end of March.

Subsequently, real GDP fell 0.4% in April compared to the previous month. The manufacturing sector was now the main drag on economic activity. This is consistent with the manufacturing PMI declining and car production falling sharply in April. Based on the original Brexit date, many car factories arranged to bring forward shutdowns normally scheduled for the summer holiday period to April to mitigate potential disruption. However, it is worth treating the monthly GDP data with caution because it can be subject to significant revisions.

Business investment increased in Q1 2019 for the first time in more than a year. The ONS reported that business investment climbed 0.4% compared to Q4 2018. By type of asset, the main contribution was from other buildings and structures, which consists of buildings other than dwellings. The rise in investment in other buildings and structures was the fourth in a row and the largest in more than two years. Comments from some market participants suggest the strong investment in this asset reflects a recent increase in the demand for warehouse storage space amid Brexit stockpiling and the growing popularity of online shopping.

Change in UK business investment from the previous quarter 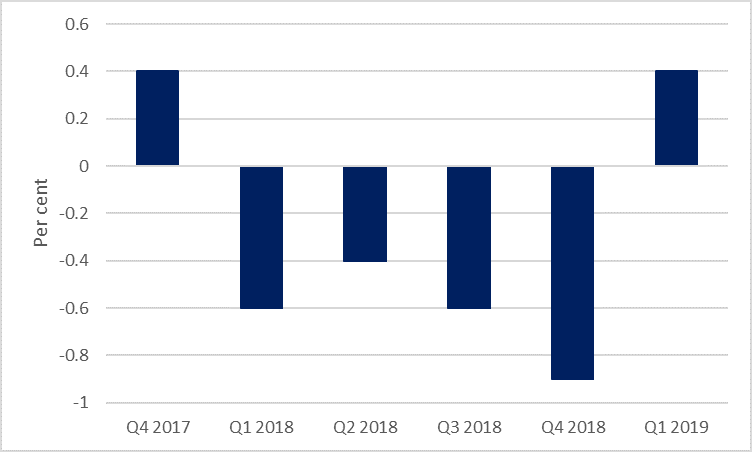 A second possible explanation for the improvement in headline business investment in Q1 2019 is pent-up demand. The ongoing Brexit uncertainty has led many businesses to postpone investment but, in some cases, the delay cannot be indefinite for reasons including that assets wear out and need to be replaced.

Surveys suggest that the recent rise in business investment will not be sustained in subsequent quarters. The Q2 2019 BoE Agents’ summary of business conditions reported investment intentions fell to the lowest level since January 2010. Furthermore, the Q2 2019 FSB Voice of Small Business survey showed the share of firms expecting to increase capital investment in the next quarter fell to 27.7%, the lowest in nearly two years.

The BoE recently revised up its forecasts for the UK economy and business investment in 2019. The economy is now expected to grow 1.5%. This compares to a forecast of 1.2% previously, again partly driven by the temporary boost from stockpiling. Business investment is now forecast to fall 2.5% (compared to a decline of 2.75% previously). However, the OECD and Conference Board leading economic indicators both suggest an uncertain and weak UK macroeconomic environment for the rest of 2019.

The Brexit Extension until October 31 has prolonged uncertainty, weighing on the business confidence of SMEs

The ongoing uncertainty has weighed further on small business confidence about prospects for the coming months. The Q2 2019 FSB survey showed the confidence index fell to -8.8 from -5.0 in the previous quarter. The index was negative for the fourth consecutive quarter, the first time this has occurred since the survey began in 2010. 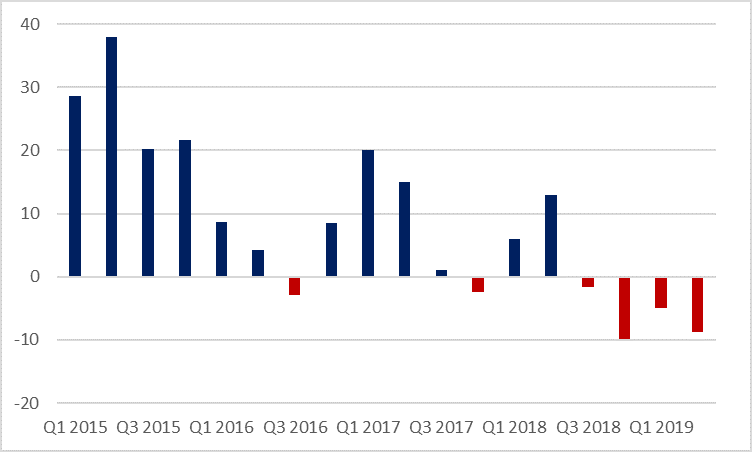 The recent weakness of small business confidence is not unique to the UK. Germany’s Kfw-ifo SME Barometer fell in June 2019 to a three-year low. The survey linked the decline in confidence to weakening of the global economy, trade tensions, Brexit and growing geopolitical risks including in the Persian Gulf. The weakness of German confidence suggests that Brexit uncertainty may not be the only factor weighing on the UK economy.

Gross new bank lending to SMEs in first five months of 2019 was lower than in the same period last year, according to BoE data. Excluding overdrafts, gross new loans totalled £23.1 billion in 2019-to-date. This is down by 2.9% from £23.8 billion in the corresponding period of 2018. 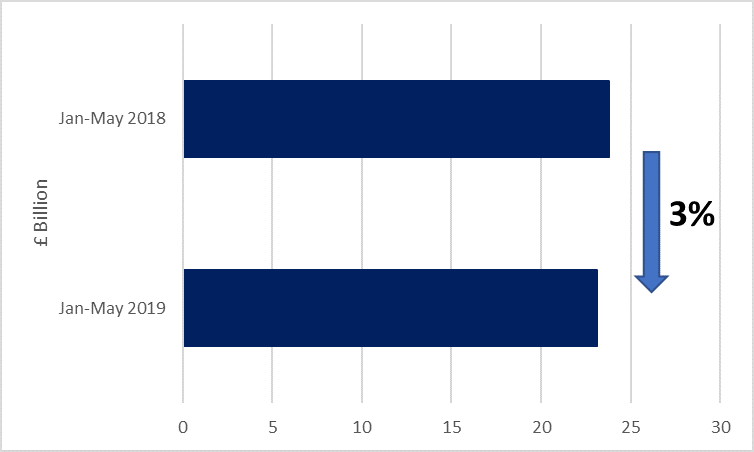 The British Business Bank’s market contacts continue to indicate little appetite among SMEs to invest for growth. This resonates with the ongoing weakness of business investment, ie the prolonged Brexit uncertainty is having an adverse impact on the use of medium and long-term loans. It also chimes with some signs of weakness in non-bank lending to SMEs. For example, the chief executive of peer-to-peer SME lender Funding Circle recently cited a sharp drop in demand for loans as one of the reasons for halving the company’s growth forecast for 2019.

However, our market intelligence still signals that some SMEs have increased their use of bank overdrafts as working capital. This is consistent with the Q1 2019 BoE Credit Conditions Survey reporting that more lenders saw an increase in demand for overdrafts and other types of unsecured lending than a decrease. A possible explanation is that some smaller businesses have increased their use of short-term borrowing to cover the costs associated with mitigating the potential Brexit-related disruption such as stock-building.

The Q2 2019 BoE Agents’ summary reported that credit generally continued to be readily available. Also, our market contacts have been given no indication that lenders are tightening credit policies.

A possible explanation for the decline in repayments is that some SMEs earlier paid down debt to strengthen their balance sheets ahead of the original Brexit date. Another could be that SMEs have recently had less funds available to repay the loans than previously. The proportion of SMEs holding £10,000 or more in credit balances in the three months to May 2019 was 21%, according to the BVA BDRC SME Finance Monitor. This is down slightly from 23% in the 2018 calendar year. 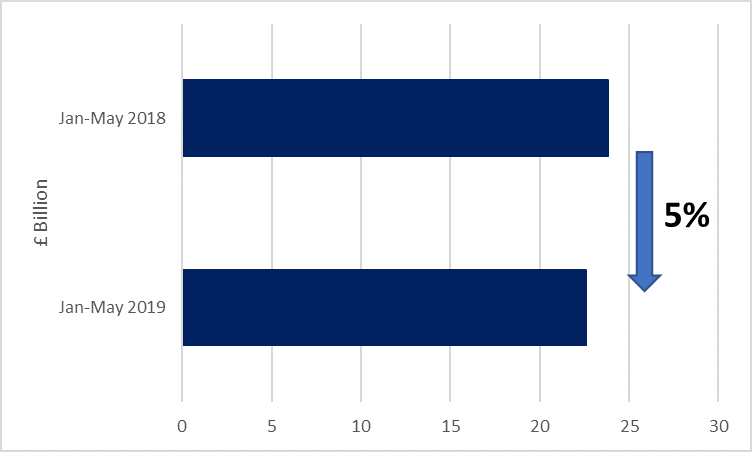 Utilising data from the Finance and Leasing Association, the British Business Bank estimates the total value of new asset finance to smaller businesses in the first five months of 2019 was around £8.1 billion. This is up 8.4% on the same period in 2018. Similarly, the Q2 2019 BoE Agents’ summary noted that asset finance remained readily available, with strong demand from smaller companies. 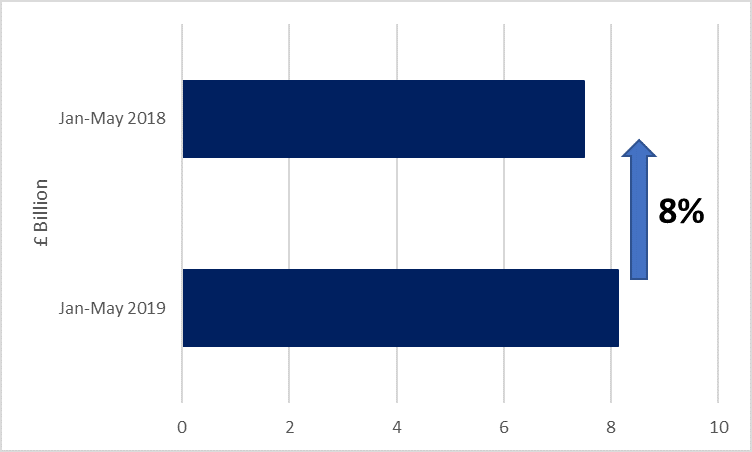 It’s too early to tell if the recent strong growth will be sustained. The growth of new finance for commercial vehicles has been particularly robust in recent months. The FLA has flagged this may in part reflect the bringing forward of investment ahead of the introduction of EU regulation that requires new commercial vehicles to have smart technographs from June.

There were 407 announced SME equity deals in Q1 2019, according to Beauhurst. This is 2% higher than in Q4 2018, a positive sign that may signal the market is stabilising after a slightly weaker 2018. Deal numbers declined 6% last year, driven by weaker deal activity in the second half.

Cumulative number of deals over year 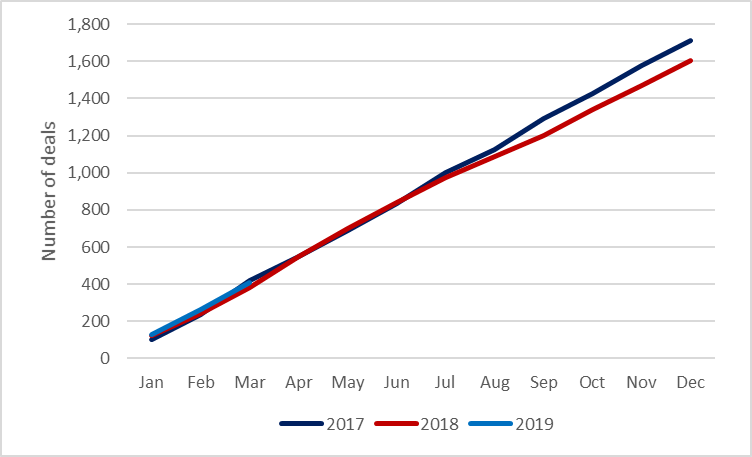 The total value of equity investment received by SMEs in Q1 2019 was £1.6 billion. This was down 6% from the previous quarter but 36% higher than the £1.2 billion invested in Q1 2018. Large equity rounds in SMEs including Iwoca, Starling Bank and GoCardless were a key driver of this. Overall, Q1 2019 was a strong quarter for SME equity investment. 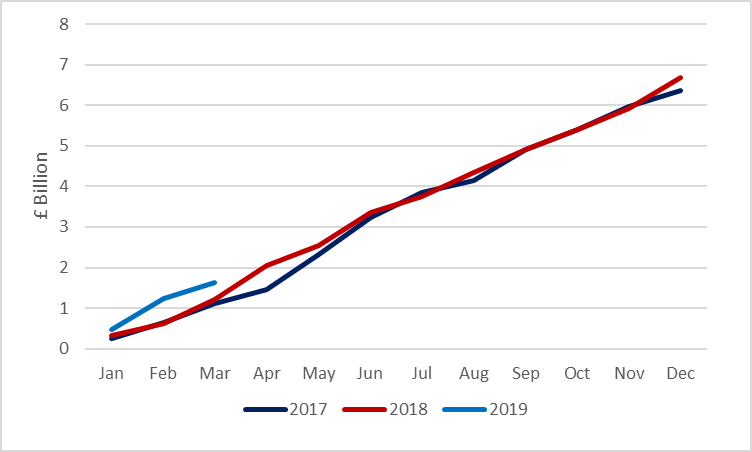 Early market indications for Q2 2019 suggest it has the potential to be an even stronger quarter than Q1, with several large equity rounds occurring in the quarter, eg Deliveroo (£450 million) in May. The UK appears to be following wider European investment trends, as Dealroom noted that “Q2 was one of the most active quarter for UK and France and also for the rest of Europe excluding the big three”. However, there is no indication that equity deal numbers have substantially improved from their subdued levels.

The second quarter of 2019 saw alternative providers of finance to SMEs raise additional funding amid the challenging economic environment. Examples include Crane, a venture capital firm focused on early stage intelligent enterprise start-ups, closing its first institutional fund at over £90 million. British Patient Capital supported the fund with a commitment of around £31.3 million. Also, asset finance and leasing provider Simply- secured a third guarantee of £60 million from our ENABLE programme, bringing the total facility to £180 million.

Such fundraising indicates that the diversity and structure of SME finance markets has continued to develop, giving SMEs a wider range of options when seeking finance.

In a separate development, Nationwide Building Society, Investec Bank and The Co-operative Bank won funds from the second £80 million tranche of funding from the £775 million Alternative Remedies Package, which aims to boost competition in SME banking markets. Nationwide won the largest share (£50 million), followed by Investec and The Co-operative (£15 million each).

The following table brings together the latest data from multiple sources, to present a snapshot of the current values of various types of external finance – and the number of reported deals for equity investment – provided to UK smaller businesses. Our 2018/19 Small Business Finance Markets report looks at market developments in more detail including regional comparisons and deeper dives into the demand side.

The information contained in this table should be viewed as indicative as data and definitions are not directly comparable across different sources. There can be

some double counting across estimates in different parts of the table. Flows data are cumulative totals for the year or to the date stated. Non-seasonally adjusted.

(a) Net flows figures do not always reconcile with change in stock because of differences in statistical reporting.

(b) Data exclude overdrafts and covers loans in both sterling and foreign currency, expressed in sterling.