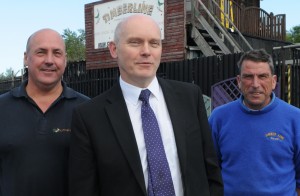 The company was badly hit by the recession together with a log shortage in 2010. It came shortly after it had invested £300k to expand the business as well as receiving a large tax bill, both of which were funded through existing funds.

Unable to replenish the working capital, it led to an extremely difficult time for the company leaving it with the option of closing the business, wiping out the debts and buying the business back in a pre-pack deal for £50k.

Instead the directors were keen to do the honourable thing and pay the creditors as much as they could afford while continuing to trade. It therefore entered into a CVA with an agreement to pay them all 33p in the pound over a five year period.

The great news for the creditors is that Timberline has done far better than that, as it will have paid £950k back to creditors, equivalent to 96p in the pound, when the agreement comes to an end in September. The business has since gone from strength to strength.

However it was nearly a different story when its high street bank did a U-turn on an invoice finance facility it had agreed with them by dramatically reducing the percentage it advanced on the invoices issued, resulting in the company almost going bust.

Timberline was rescued by Ultimate Finance who provided it with a new £250k invoice finance facility enabling the company to trade successfully and rebuild the business.

Managing director of Timberline, Brian Moyse, is proud of the company’s achievement.

“Everything seemed to hit us at once in 2010 causing us sleepless nights. However we did not want to take the easy option by just starting again as a new company. Instead we wanted to pay back as much as we could to our creditors, who were very understanding.
“The experience has caused me to lose faith in high street banks, as they did nothing to help and support us during the difficult times. Fortunately Ultimate Finance could see the potential of the business and they saved the company by coming to our rescue.
“Due to their help, the hard work of our team and the patience of the creditors we have been able to pay everyone back and the business is going from strength to strength.”

Regional director of Ultimate Finance in Newcastle, David Paget, is delighted with the outcome.

“More and more people are coming across the high street banks’ unwillingness to lend which is putting unnecessary pressure on SMEs. For some reason they can’t or don’t want to see the potential in a business. That is why so many are turning to asset-based lending to help with their cashflow.
“Timberline is a great business that was hit by circumstances beyond its control. It was clear to see that it is a solid business that just needed some help to get through a tricky patch and we were delighted to help.
“It has been trading for 27 years and I am confident there will be many more years of success ahead of them.”

More case studies from Investment Programme and our other commercial investments