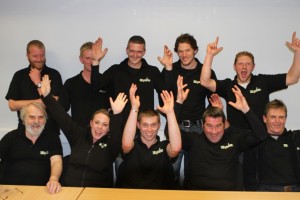 Your new business begins with a modest amount of capital and a good contract with a large customer. Soon you need to make a significant investment in order to meet the growing needs of your customers – but have you got the financial track record to secure the finance?

Every livestock farm needs a good fence. Off the beautiful coasts of north and west Scotland, that means miles of underwater nets for the millions of fish destined for our dinner plates. Divers must check regularly on the state of the farm – for holes in the nets of pens, inspecting the moorings and the like. It’s hard and unglamorous work.

And it’s work that the sea farms sub-contract to independent – and usually-self-employed – divers. With the work being conducted under water and far out of sight of the customer, it’s vital that there’s complete trust between the contractor and diver.

The sea farm operator Scottish Sea Farms certainly trusted Murdo Smith. It was their support that prompted Smith and his partner Helen Dewar to set up MDive, a commercial diving company based on the Isle of Mull. “We had been talking about it but Scottish Sea Farms gave us the kick up the backside that we needed,” says Dewar.

The nascent company had to meet Scottish Sea Farms’ exacting standards; for example, it had to conform to quality standard ISO 9001 and subscribe to the RBS Mentor employment and HR advisory service. It was administratively demanding for a couple who had not started a business before, but it meant that MDive started out firmly on the right foot. 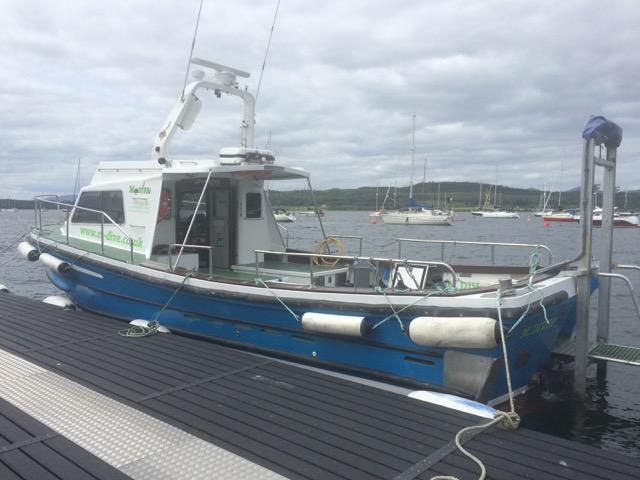 Marketing itself as a specialist diving business, MDive immediately set itself apart. Its divers are full-time employees. They wear branded MDive outfits. (The costs alarmed Dewar – and her father, who is the company’s finance manager – but got great feedback.)

While their initial funding had come from an investment by a friend, several grants, and the contract with Scottish Sea Farms, it was not long before MDive needed a loan to help it expand.

“We were too reliant on ferries,” explains Dewar. “Not only were they a cost to the business but their timetables constrained the number of jobs could we fit in a day and which sites could we reach.” As the number of MDive’s mainland clients increased, the company had to be more flexible. The timetable of a ferry operator doesn’t suit a service business that has to answer emergency call-outs.

In other words, MDive needed its own boat. It had to be large enough to store diving equipment such as a compressor and generator. “Murdo, rightly, insisted that we had a substantial and safe craft that could provide warm and dry facilities for the divers,” says Dewar.

Overcoming the lack of a financial track record

Such a boat was going to cost £80,000. And while the forecasts for the fledgling business looked good, it was still only in its first year. “Our lack of a financial track record was our main struggle. We tried various avenues for funding but were unsuccessful,” says Dewar.

Through the Business Gateway, MDive was introduced to Glasgow-based DSL Business Finance. DSL is a not-for-profit lender that provides funding to small to medium sized businesses throughout Scotland, the majority of whom have been declined finance from mainstream lenders.

DSL provides these loans under the Enterprise Finance Guarantee (EFG), a guarantee scheme managed by the British Business Bank to facilitate lending to viable businesses that have been turned down for a loan or other form of debt finance due to inadequate security or a proven track record.

By providing lenders with a government-backed guarantee for 75 per cent of the value of each individual loan, the British Business Bank and the lender share the risk and facilitate loans that would otherwise not take place.

The licence to offer the government’s Enterprise Finance Guarantee scheme is extremely important to DSL. “The use of the EFG enables us to be competitive in the marketplace,” says Sandra McLean, fund manager at DSL Business Finance. “It also provides us with a degree of security for loan defaults without which we could not function.”

Smith and Dewar applied for a loan and were interviewed by a panel. “We thought it was going to be like Dragons’ Den,” Dewar laughs, “but they could see how passionate about the business we were. We got the nod before we left the building! Both Business Gateway and DSL have been fantastic – they believed in us and have helped us. It was a breath of fresh air that DSL listened to our proposals, took us seriously and helped us turn our plans into reality. ”

MDive purchased the boat in September 2014. Apart from saving more than 50 per cent on annual ferry costs, it has opened up new markets.

“The boat has been brilliant,” says Dewar. “We now have 14 customers, most of whom are not fish farms. We now do mooring inspections for marine research facilities. We are doing salvage work.” The couple have another new venture planned for early 2016 that will see MDive acquiring another new piece of kit. “This has already led to some significant new contracts,” she adds.

The original core business is growing healthily, too. Its Scottish Sea Farms business has expanded from 12 to 19 sites and will soon cover more. Its business with Scottish Salmon Company covers four sites and looks set to extend across the north-west of Scotland. Marine Harvest, a global seafood company and the world’s largest producer of Atlantic salmon, is another customer with a growing demand for MDive’s services.

Dewar is careful about managing the rate of growth. “We started with nine employees, which included two teams of four divers. We now have additional divers who can provide cover and there’s enough work in the pipeline to set up a third team – but we don’t want to get too big, too quickly. We want to get things right. It takes time to build up the right teams.”

Of course, it is not all plain sailing (pun intended). Like many small businesses, MDive needs to invest before it can secure and deliver the contracts that will generate cash and build up the business. It needs to recruit more qualified staff. The costs of maintaining the ISO quality standards will remain high.

However, with the confidence and knowledge of how and where to access alternative sources of funding, this is one young business that can keep its head above – as well as under – water.

To find out more about how the British Business Bank makes it easier for businesses with high growth ambitions to find the early-stage finance they require, visit the Stay Ahead section of our website.

Find out more about MDive Ltd