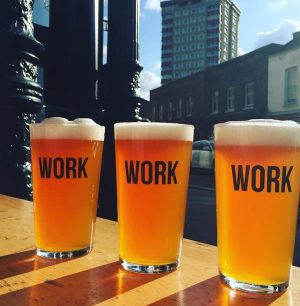 Forest Road Brewing Co was started by Ian McRae, head brewer Pete and two Americans with 13 years brewing experience between them –  at six different breweries in two different countries – with the aim of making great beer in the number one city in the world!

They met at Camden Town Brewery in 2012 where both worked as brewers for 3 years. After brewing half a dozen award winning recipes and developing recipes for two of Camden’s best rated beers they decided to strike out themselves and start their own brewery. The only problem was that they didn’t have the funds to build their own.

Through connections in the industry they somehow ended up brewing their first 15,000 litre batch in one of Belgium’s most famous family-run breweries, all without paying a penny up front. Over time they have built a great relationship with them and continued to develop their beer, “Work”, a 5.4% American-syle pale ale.

From purchasing raw ingredients to selling beer takes almost two months (the beer has to ferment and condition tanks for five weeks). Add on payment terms with customers and there is a big gap between increased sales and cash in the bank. The business needed funding to brew more beer and pay the duty on it.

Ian and Pete applied to increase their overdraft with their bank but weren’t able to. However their bank, which is a participant in the Bank Referrals Scheme, immediately offered them a referral to the Funding Xchange platform to see what alternatives were available.  Their application returned a number of loan options, and they opted for Iwoca, as the terms and flexibility suited what their business required.  After accepting the offer, the £16,000 of funding they needed was approved and made available the very same day.

Ian Mcrae, Founder of Forest Road Brewing Co, said: “The funding has provided us with access to cash, whenever we need it, which means we can make sure suppliers are paid quickly and that we can fulfil our growing sales orders and be ready for our new product launch.”

Ian and Pete are now growing sales towards an anticipated London brewery opening in late 2018.